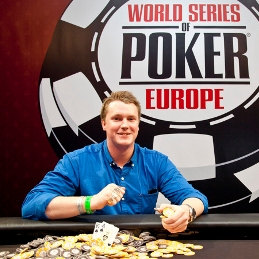 There was a wonderful turn out for Event #2 at the World Series of Poker Europe (WSOPE) in Cannes. 771 players contributed €1,090 each thus creating a juicy looking first prize of €148,030, a first prize that is now in the bank account of one Andrew Hinrichsen.

It took three days of action to whittle that field down from 771 players to a final table of nine. When the final table started Hinrichsen was sat in second chips behind the runaway chip leader Gianluca Speranza (brother of Alessandro Speranza who went deep in Event #1). In fact it was Speranza who was responsible for eliminating Gregory Lejolivet in ninth place in just the first few hands of the day.

Nabil Nadjai and John Eames followed Lejolivet out of the door before Speranza struck again when he eliminated Eric Baudry in sixth place. The elimination of Baudry gave Speranza more than half of the chips in play.

Next to leave was a man who was trying to complete the coveted Triple Crown in less than one year. Roberto Romanello had already bagged an EPT and WPT title and he was so close to a WSOP bracelet when Bernard Guigon eliminated him. Guigon was next to go with Tarcisio Bruno hot on his heels, leaving Speranza and Hinrichsen heads up for the title.

Australia versus Italy and it was a 7th gold bracelet for Australia as Hinrichsen sealed the deal and sent Speranza out in second place.

Alex, who wrote this article, often takes time out to play online casino games, from poker to blackjack, in her spare time.