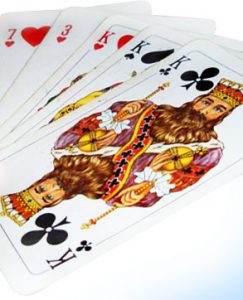 Draw poker is a classic poker game which is the subject of many Westerns. Traditionally played across America, the game comes in various forms, namely 5 card and 7 card. In each you’re given an initial collection of cards by the dealer and your job is to make the strongest 5 card hand possible.

As with all games of poker the ranking of hands runs from a Royal Flush to a lone high card. In order to improve on your hole cards – the cards you were first dealt – you’re allowed to discard some, none or all of them. This process is called drawing, hence the name Draw Poker; this is as important in a live draw as it is an imperative online poker strategy.

Draw poker is usually played with limited betting; this means that you are only allowed to bet a certain amount on each street. In some places you can find a pot limit variation of the game which means you can bet an amount that is less than or equal to the size of the current pot.

Because of the betting structure and the reduced scope for making a strong hand there is a lot less bluffing in Draw Poker and, generally, a weaker collection of hands at showdown. Moreover, you will see a showdown a lot more often than in other forms of poker such as Pot Limit Omaha or No Limit Texas Hold’em.

Hand selection is very important in Draw Poker. You should only ever look to discard a total of 2 hands if you want to contest a pot. Indeed, having to draw any more than this often means your hand is weak and the chances of improving are low.

Draw Poker is a great way to learn the mechanics of the game as a whole because of its sedate nature. Other poker games can often be faster paced and aggressive but this one allows you to gradually get a feel for some of the skills required to be a great overall poker player.